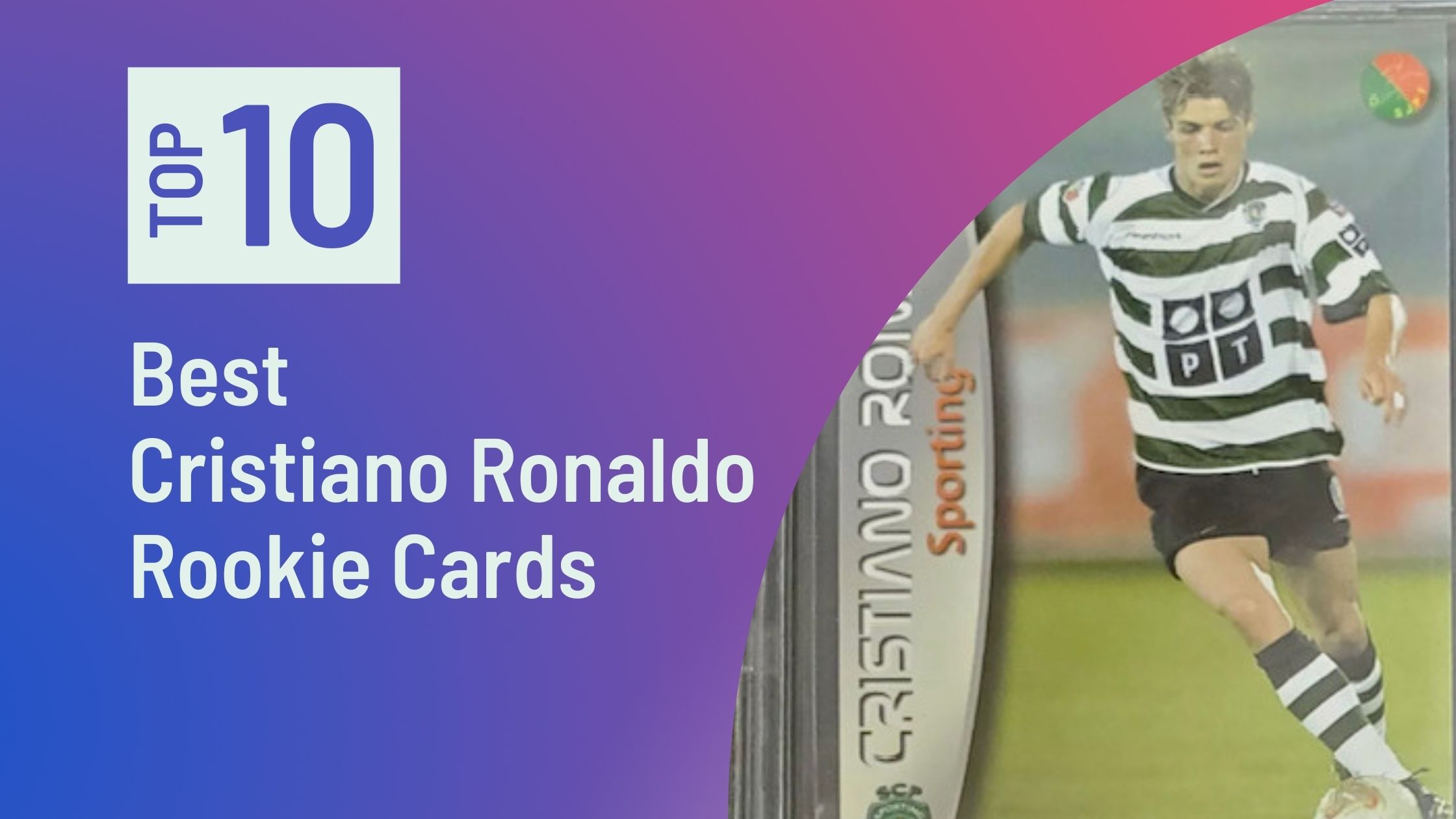 We use affiliate links and may receive a small commission on purchases from eBay or other partners. Please help support a small business. Read more about us.

Hello! If you’re looking for a list of the best Cristiano Ronaldo soccer/fútbol cards, then you’ve come to the right place.

But what does “Best” really even mean? It’s just so subjective. If you read 10 of these blogs, you’ll probably end up with 10 different opinions.

And to be transparent, when it comes to cards, we’re ALL about the aesthetics. We buy and collect sports cards that we think look dope and will stand the test of time as younger collectors and investors enter the market.

How Do We Pick The Best Cards?

The rookie cards we select for our lists are judged based on 3 criteria:

What Makes Us Different?

Why Should You Trust Us?

Our Founder is an 80's baby that grew up in the 90's collecting sports cards during the junk wax era.

While card collecting when on hiatus for a couple of decades, that passion was re-sparked in 2020 and we haven't looked back since.

We spend countless hours researching each player and constructing these posts to help you save time and energy so that you can focus on the fun part which is collecting!

Why We Love Cristiano Ronaldo

Our List of the Top Cristiano Ronaldo Soccer Cards 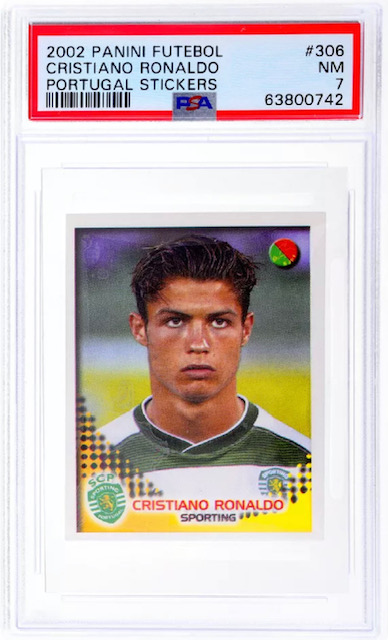 Cristiano Ronaldo rocketed up the youth system for Sporting CP, debuting at 17 and scoring two goals in his first game. We probably should have known at this point that he had the potential to go down as one of the GOATs. 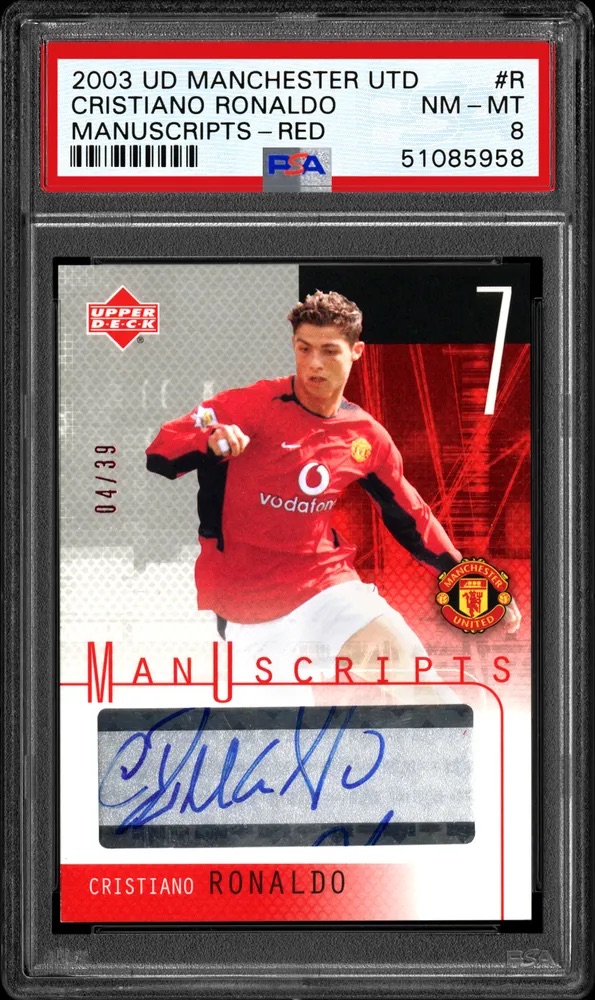 Ronaldo broke out with Man United and started to become a household name early on in his stint in England. At the time, his transfer fee made him the most expensive teenager in English football history. Sir Alex Ferguson definitely made the right call on that one! 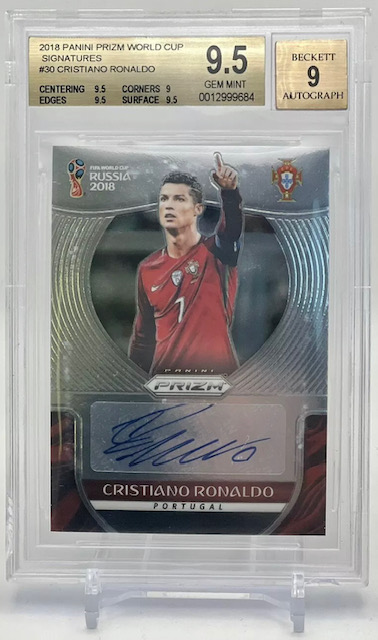 Ronaldo had quite a run in the 2018 World Cup, being named to the World Cup Dream Team. Unfortunately for Portugal, they were eliminated by Uruguay in the round of 16, ending another opportunity for Ronaldo to bag a World Cup trophy. 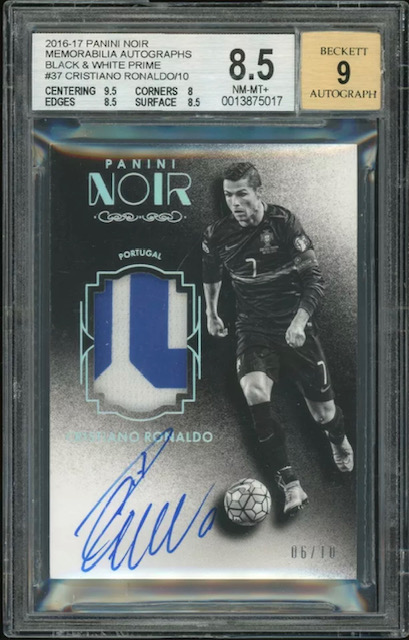 Whoa. What do we have here? A print to /10 Ronaldo card with an auto insert and a jersey patch. This is one rare card that you better check out! 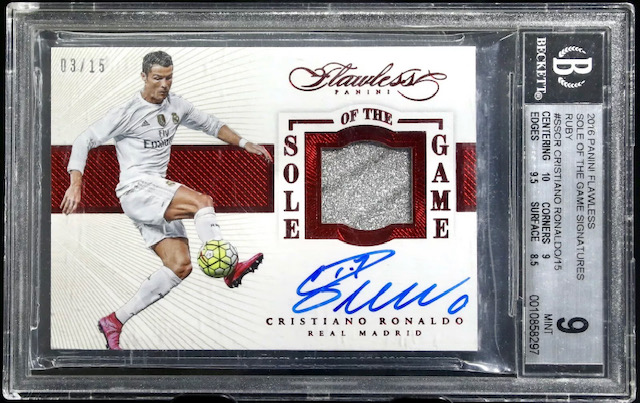 Real Madrid is where CR7 started to cement himself as one of the best to ever play. He holds the record for most goals scored at the club, along with multiple trophies won as well. This Sole of the Game card is pretty sweet. We approve! 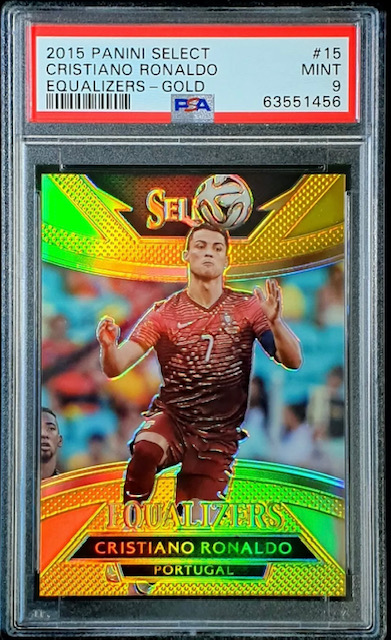 Ronaldo is also one of the greatest international players too. He can do it for both club and country. These red Portuguese kits are fire. Couple that with the shiny, rainbow background and this card is an all-timer. 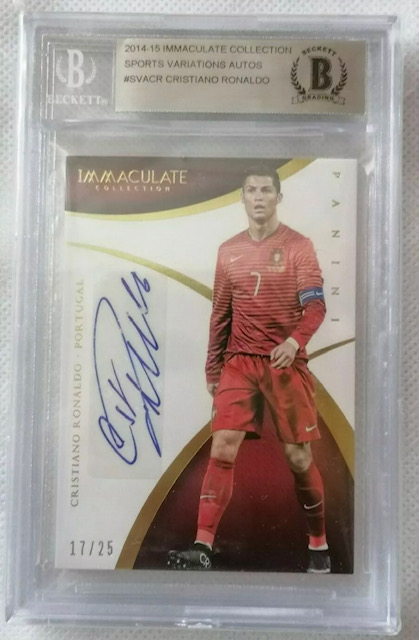 If you can cop a CR7 auto insert with a print to /25, it's an absolute no-brainer. You have to do it! The guy is world-class and his legacy will last forever, not only among soccer aficionados, but also sports fans in general. 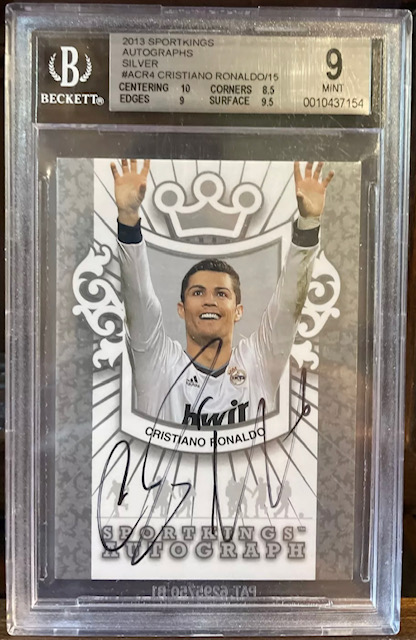 This card is so sleek! We love the white background accompanied with the white Real Madrid kit. Add the Ronaldo signature and this is one you can't refuse. 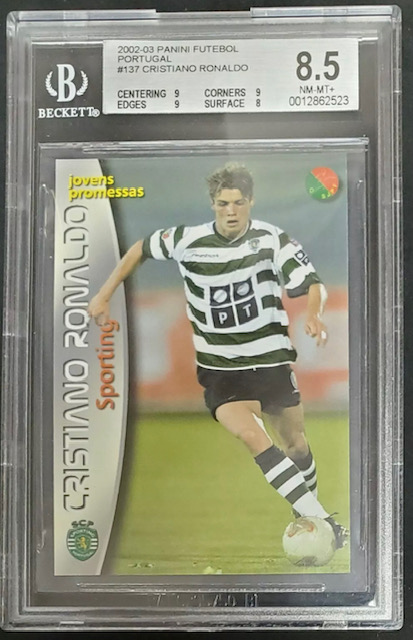 This might not look like the Ronaldo you know and love today, but this is in fact the kid who grows up to be the one of the best ever. If you can get your hands on a Cristiano Panini rookie card, we can almost guarantee it will benefit you in the long run. 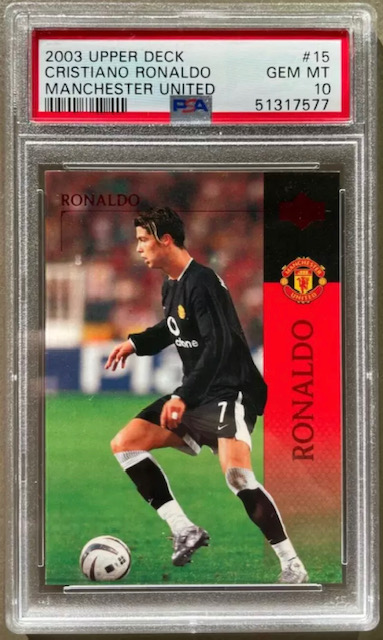 These United jerseys are iconic; throw Ronaldo in the jersey and it makes them legendary. This Upper Deck card is one of our favorites and really shows off CR7's elite ball skills.

Affiliate Disclaimer: The links in the article contain affiliate links and we receive a small commission for any purchase made on eBay. We appreciate your support!

James Sargent is the Head Writer & Analyst of Sports Card Sharks. His pro sports teams are the Suns, Cardinals, Diamondbacks, and Arsenal F.C. Sargent graduated from the University of Arizona so he is an avid Wildcat fan – Bear Down! He is also an outdoor enthusiast, consisting mainly of fishing, camping, and hiking.

This site uses Akismet to reduce spam. Learn how your comment data is processed.